The concept of the MG restaurant is a retrospective of the almost 30-year experience of chef and co-owner Miroslav Grusz. Italian, Mediterranean and Czech cuisine in a unique surrounding of the airport in Mladá Boleslav, situated in a modern design building. The dishes on the menu naturally come and go according to the availability of seasonal ingredients. Fresh ingredients, contemporary and traditional cooking, pleasant and professional service. The wine menu contains over 190 types of wines. You can also taste some exclusive wines by the glass, thanks to the unique Coravin method. The complex offers accommodation in luxury apartments and the hotel has the option of recharging 4 electric cars, 2 stands are for the Tesla brand and 2 for other electric cars. The separate function room for up to 12 to 16 people is suitable for closed business meetings. The second floor of the building offers another separate function room with a terrace overlooking the airport, which is suitable for private events.

Chef Miroslav Grusz worked alongside excellent chefs during his professional career, who helped to shape his style of cooking. After graduating from chef school, he started working at the Renaissance Hotel in Prague, where he gained his first cooking experience under the guidance of chef Zdeněk Pohlreich. He then headed to his first foreign work experience – the Marriott Hotel in Zurich.

Upon his return, he joined the Allegro restaurant at the Four Seasons Hotel in Prague. Here he met the absolute top of world gastronomy Italian chefs Vito Mollica and Andrea Accordi. During that time the restaurant Allegro gained the Michelin star, the first in the Czech Republic and in Central Europe. Here he also finds passion and love for Italian cuisine, which persists to this day. The next steps naturally led him to Italy. In the Palagio restaurant of the Four Seasons hotel in Florence, he worked again alongside Vita Mollica (1 Michelin star) as an executive sous-chef.

After returning to the Czech Republic, he spent 4 years at the Augustine Hotel in Prague, which was part of the exclusive Rocco Forte Hotels chain, where he gradually worked his way up to the position of the executive chef. The restaurant under the leadership of Miroslav Grusz was named the third best fine dining restaurant in Prague in the EURO magazine food guide. Next move led to the renowned Prague restaurant Aromi (owned by a well-known ambassador of Italian gastronomy Riccardo Lucque), where as a chef de cuisine he was able to fully apply his experience from abroad, creativity and a feeling for quality ingredients. Under his leadership, the Aromi restaurant has twice defended the prestigious Michelin Bib Gourmand award.

The opening of his restaurant bearing the initials MG is the culmination of a rich professional career. Italian and Mediterranean cuisine is combined with Czech cuisine, which naturally belongs to the repertoire of chef Miroslav Grusz. And as he likes to say: “Food is very important from a cultural point of view. Traditional cuisine has always reflected the image of the nation and we should not forget it. Czech cuisine offers a vastly varied and rich world and a wide range of dishes and flavours. In my opinion, it deserves respect and should always be prepared with a good dose of patriotism at heart. Our concept of Czech cuisine is based on Czech ingredients and tastes that evoke nostalgic memories and bring to the stage tastes that are close to us.” 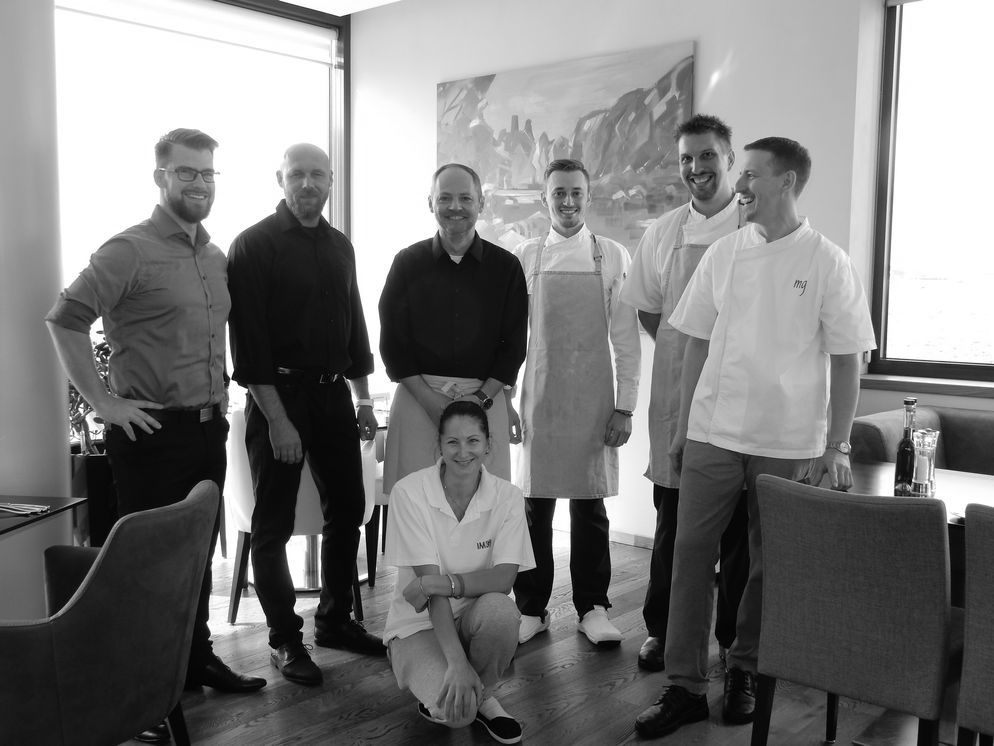 MG restaurant is also a proud member of the worldwide Slow Food movement. Its philosophy can be summarized in three basic points. And as founder and president of Slow Food, Carlo Petrini said: “Everyone has the right to good, clean and fair food. Good in terms of quality, tasty and healthy. Clean production that does not harm the environment. Fair affordable prices for consumers and fair conditions and payment for producers.”

Looking forward to welcoming you at MG restaurant!